Morgan history dates back to 1899 when the teenage son of a Hereford rector, H.F.S. Morgan, had a rather risky ride down a steep hill in a cycle car. Just over ten years later the first Morgan was born – in the form of a three wheeler with an 8 h.p. twin cylinder J.A.P. engine, a tiller and a single seat. It is interesting to note that the independent front suspension used on the first car was extremely advanced for its time and is almost identical to that used on all traditional chassis up until 2020 when the new CX models were introduced. The coming of four wheels eventuated in 1935 and, sadly, three wheels were discontinued in 1950 however a modern version was introduced to rave reviews in 2012 and is still in production. The English Morgan Sports Car Club, (or Four Wheeler Club) was consequently founded in 1951. 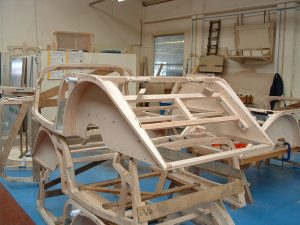 The Morgan Motor Co  Ltd., is a small factory that continues to hand build that delightful anachronism, the Morgan motor car. The Morgan car is entirely hand built in a small factory in Malvern Link, Worcestershire, using construction methods and equipment dating back to the early part of the 20th century. The body is constructed of steel or aluminium attached to a framework of Belgian ash timber.  This provides a body that is both light and strong. Since 2020 all Morgan four wheel cars have been manufactured on a bonded and rivetted aluminium chassis using aircraft technology.

The Morgan company has never produced its own engines, gearboxes or brake components, preferring to use Ford components where possible, although more recent models have been produced with Fiat, Rover and BMW engines and the early +4 used the Standard Vanguard and later the range of 4 cylinder Triumph engines. The original Plus 8, produced between 1968 and 2004, used a Rover V8 engine and gearbox mounted into the same basic chassis as the Plus 4 and 4/4 models, producing a classic sports car with phenomenal performance.
In 2004 the famous Original Plus 8 ceased production due to the non-availability of suitable engines and it was replaced with an even more potent Ford V6 model, called the Roadster. Some of these new models have come to Australia.
In 2000 a new model was created, known as the Aero 8. This new car had a different look and uses brand new state of the art construction methods, although it is still recognisable as a Morgan. The car is powered by a BMW 4.4 litre quad cam V8 and uses aluminium honeycomb construction techniques with laser cut body panels where possible. In 2012 a new version of the Plus 8 was produced on the aluminium Aero chassis and powered by a BMW V8.
The average production rate is fewer than 20 cars per week and there is usually a small waiting list, especially for highly optioned cars. The last model change was in 2020 with the last traditional steel chassis cars being superseded by the newer CX chassis cars. However, the classic shape of the Morgan sports car continues and is one of the few shapes that has a world wide patent. (One of the others is the curves of the Coca Cola bottle.)