My interest in cars started with my 1928 Austin Seven Ruby. A tremendous little car, I was sixteen.1961.

Cars were always the top of my list of interests, well almost !!

My father said there were 3 wonderful sights, a galloping stallion, a ship in full sail and a beautiful naked female. I agree but would add, a traditional sports car roof down and going some!!! 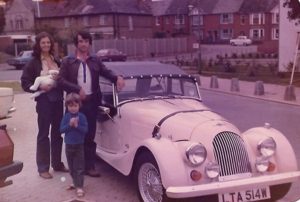 My first Morgan 4+4 ivory white, purchased in Exeter Devon 1980, after a three year wait. Lynn, Justin in arms,  Alex and I. We were visiting Exeter from Australia after 3 years and were told our Morgan was ready at Exminster. What a surprise, no deposit was necessary when we ordered , I had forgotten about timing. We kept for 10 months until returning to Australia and sold to an engineer friend.Now in Canada.

We were going to see a film in Exeter many years before, a rainy evening and we parked behind a DB5 Aston Martin, midnight blue. a car I had for some time admired. I left a note under his wiper blades saying I was interested in his car had he thought of selling it.

The next day I had a call from Ward Tetley, who thought I was a friend of his, he was also named Graham, we arranged a pub visit and negotiated a swop my Cortina and cash for his DB5.

He was going on a safari in South Africa and decided to sell. (He is the son of the Tetley Tea owner.) The car was originally owned by Screaming Lord Such a well known politician in London. This car I sold in 1977 for 2,500 GBP. Now worth over 1M GBP thanks to James Bond.

After a couple of years I applied for an Engineers position at the Devon Area Health Authority, which I was selected for. Loved Exeter, Cathedral, University. Rolling hills of Devon, viewed from our bungalow..

A list of over 70 cars  including a Ford Meteor and Pontiac Parisienne  coupe 1968, , VW campervan , Land Rover (refurbished Mechanics me, interior Lynn  whilst in Canada) Mercedes new for export to Sydney. Morgans , 4+4, x2, Morgan +8 lightweight 1977 and our spectacular + 4,

I Joined the Morgan Club (MOCA) in 1997.We love all the club runs, Christmas in July, the meetings and the lovely people from all walks of life. I obtained  a CAMS  Bronze license and acted as Chief  Flag Marshal at several super-sprints as well as 12 hour racing at Bathurst. Was vice president for a couple of years and a committee member.

I flew to the Morgan Centenary Celebrations in England 2009 with other club members. Including Vern and Manda  Dale-Johnson. Others celebrations included  The Thrill on the Hill, and the Morgan 40th celebration in the Netherlands along with Stan & Jenny Jodeikin, driven up in Julia Woolgar’s +8 in record speed from Exeter. And returned driving Stan’s hired New Morgan to England .Enjoyed the 50th and 60th MOG Celebrations in Bathurst and  the 110 Morgan Anniversary , Curson Hall Sydney.2019. 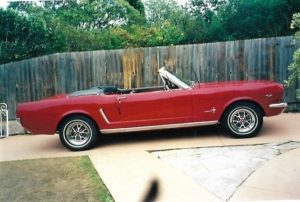 Ford Mustang 1965 imported from California whilst there for Alex & Tonya’s wedding. 2002, During this trip we explored LA Disneyland, Las Vegas, The Grand Canyon, and visited the Queen Mary birthed at Long Beach, enjoyed the silver service dinner.  (We left Southampton dry dock whilst sailing on the Canberra in 1967 to allow the Queen Mary to effect repairs before sailing to LA)

After restoration carried out by Frank Lacey. Melbourne. He restored Kylie Minogue’s Mustang.I had visited many cars for sale whilst in LA eg an E type Jag which had gone under a truck and was written off, only had bonnet damage was to bring this back but was restricted at customs.

Again restricted by customs. After some time was able to retrieve deposit.

Story later, next to MGB bought from SA. 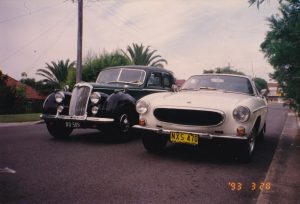 Riley 1.5 RMS, unbelievable condition ,bought from Riley collector, the money was put aside for our new kitchen, but the Riley won the day.  Volvo 1800  ES great station wagon. Much sought after. 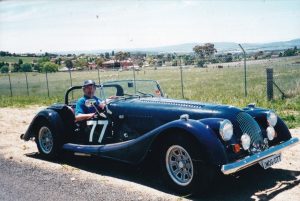 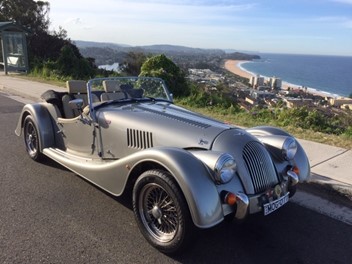 Morgan Plus 4 spectacular in all respects.