An Early Infection to the MogBug 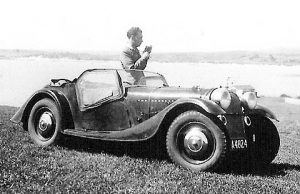 Some members perhaps are able to go back in time when the little Morgan was a rareity in Australia and this young lad looking to buy his first car came upon this rather tired looking little sportscar, a 1936 Morgan 4/4. The year was 1949 and although the car was only 13 years old, its appearance belied this fact and to say that it had been driven to hell and back would have been more appropriate The many experiences Moggy one and I shared in those days certainly set me in good stead for what the future held, casting a terrible affliction upon me be carried all my working life and still remains today. 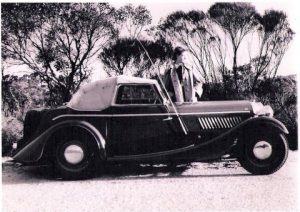 Moggy One was replaced in 1952 by a 1950 DHC 4/4 which at that time was quite a head turner and although the marque was still quite rare in Australia, this little blue coupe never failed to attract a lot of interest.

My wife Sylvia and I covered many miles in Moggy Two and she in particular has always had a very soft affection for this particular car as she learned to drive for the first time and got her licence in 1954 and so it has always had a special place in her life along with a time of good memories for me.

Throughout the 50s, I began constructing my own race cars, the first of which was a supercharged Vincent powered car based on a Mk.5 Cooper, powered by an HRD Black Shadow engine and the supercharger was a cabin blower from a Spitfire aircraft which could be bought from military disposals back then allowing for all sorts of experiments to be tried. This car is reputed to be the last motorcycle engined car to start in an Australian GP at Longford in 1957, after that came the building of the Le-Mans Jaguar Special which was an XK120 rehashed with a spaceframe chassis and all alloy body which was a handfull to drive with little finess in the handling department but after campaining this car for a couple of years I seem to remember both car and driver did improve, I believe this car to be now in Victoria being restored after being retrieved from WA. 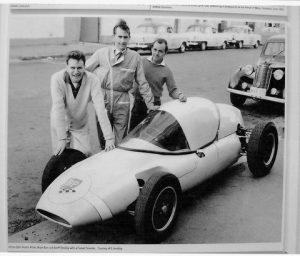 1959 saw another chapter begin after being asked to prepare a car for an attack on the Australian Land Speed Record, which was then held by Mel. McEwan and the Tornado Special, being set on Lake Eyre in 1958. An old aquaintence, Austin Miller was incensed with the idea of having a crack at this record and had at that time a 1957 2.litre Cooper Climax which was to be the chosen vehicle.

A modified chassis was needed to accommodate a 400HP Chev. Corvette engine along with a special 2 speed gearbox and a windcheating canopy to cover the cockpit area, What a monster! But as it turned out Austin proved that he not only had the ability and anatomy to drive this machine but broke the record in 1960 on the sands of Bakers Beach here in Tasmania.

In 1962 having been offered the position as full time mechanic preparing and maintaining a brand new 2.2 litre Cooper Climax for John Youl of Symmons Plains here in Tasmania really got me into the serious business of motor racing, possibly one of the first full time racing mechanics in Australia at that time and I was fortunate to become associated with one of the best steerers of that period winning many major races in the 2.2 and later with the ex. Jack Brabham (Type 54 Pencil-Line Cooper)

Contesting mainly the Gold Star and Tasman series of races it was a wonderful time to be involved, a time when there was only one car, one driver, and one mechanic whith the opportunity to be pitted against the worlds best, so many great names of that era, a time when it was a sport so unlike today’s imagery , 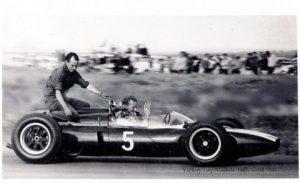 On John’s retirement I was contacted by Total Oil Company’s (Motor Racing Division) in Sydney seeking my services to prepare that teams cars, namely a Repco Brabham F1 and a Lotus 19B. for Frank Matich, We moved to Sydney and remained in the job until such time when Total had a change of policy withdrawing from motorsport worldwide and so another era had passed.

Living in Sydney was very difficult for us, we considered the only way to cope with that way of life is to be born into it, and so we moved back to Tasmania in 1967 and on the occasions I was called in I could commute from my home. In 1968 at the final race of the Tasman Series held at Longford I was working for Leo Geoghegan who was then driving the ex. Jim Clark Lotus 32 which had been fitted with a Repco V8, a disastrous meeting where the weather played havoc and sealed the fate of Longford forever. 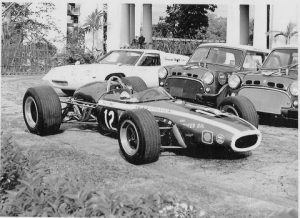 That same year I was contracted to prepare a range of cars to compete at the Singapore Grand Prix, heading the line up was the ex. Mildren/Bartlett 2.7 litre Brabham Climax, a Lotus 47, and three Cooper S’s, and this was the first time I had worked on “tin tops” a rewarding challenge after being reported by English Journalists as to be the fastest minies in the world at that time mainly because the regulations were far more open in Singapore than in Australia allowing far more extremity in development. Based in Singapore, Newton Racing covered most race meetings as far north as Macau and countries between, Thailand, Malasia, Indonesia, and Singapore itself making the logistics of transport very frustrating in those times.

Retiring from the hectic life in 1972, I began my own tuning business in Launceston eventually changing direction towards the restoration of some of the worlds great cars. Along with having been appointed sole agent and service agent for TVR and Morgan in the state I was commisioned to restore a 1938 Rolls Royce for my ex. boss P.H. Wong of Singapore, now good friend and this led to a line of restorations which are now scattered worldwide, until finally leading to the putting together and opening of the National Automobile Museum of Tasmania in 1988 which Sylvia and myself opperated for ten years until the health light started flashing. 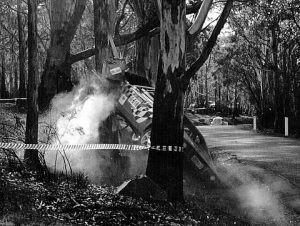 Motorsport wise I competed in Targa Tasmania for six years in a row just to be involved and to kid myself I was still a lad, and having been successful for five years and winning a range of Targa plates including the gold, I was convinced that I could make 50 years of active motor sport but that ended in a bang in 1998 when a tree hit our Ferrari the outlook changed somewhat. 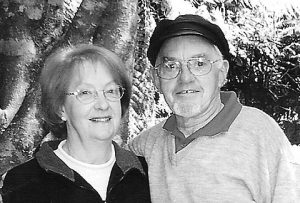 These days it’s the quiet life and Sylvia and I have just celebrated 50 years of marrage (what a Brit.) in addition we purchased a 1953 +4 which is responding to some TLC and returning a lost pleasure to a couple of old Morganeers from wayback.