Once Bitten by the MogBug Life is Never Again Normal 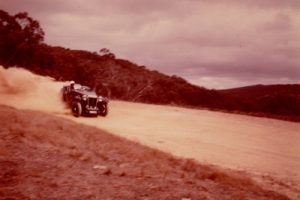 Having read Geoff Smedley’s wonderfully interesting article in the Ear and on the Web site ” First Person ” section I thought that we should really keep the wheels rolling as there are so many good stories waiting to be told amongst the Morgans and Morganeers in the Club’s Register. So here’s mine!

For me, the disease can probably be traced back to infancy as at a very early age I used to perch on the front fence in Adelaide, waiting for our neighbour to arrive home from work, sliding the tail out in his MG TC on the triangle of gravel accumulated in the centre of the T junction opposite our house. At the age of 15, I bought an Austin 7 Ulster with a boat tail alloy body, aeroscreen, and open exhaust, before moving on to a TC MG at 16. The TC was then entered in every event possible, from hillclimbs, Mallala sprints, dirt circuit events, motorkhanas, trials and rallies, the lot. (The competition secretary used to sign the entry form as guardian because my parents did not approve!) Then before heading off to Europe for the normal 3 month working holiday, which lasted for 5 years and involved the Grand Prix circuits of the continent, it happened! I saw for the first time (having lived a very sheltered life in Adelaide), my first Morgan. It was, I now realise, a green high line Plus 4 with wire wheels, walnut dash and that wonderful generously louvered and leather belted bonnet. I was smitten! Beneath my bed-sitter in Richmond Upon Thames, I discovered was a rip snorting low line Super Sports Plus 4 which parked on the street and required my occasional assistance in a push start some cold mornings. 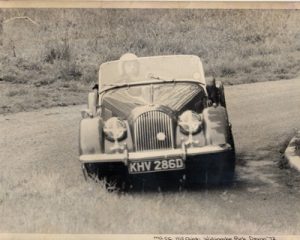 Here the downward slide began. I went off on a search for my own Morgan and after a test flight in a clapped out white Super Sports with loose spokes in every wheel and driven by a lunatic in the Midlands, I exchanged my MGA coupe plus money, for a Series V 4/4 with push/pull gearchange. I joined the MSCC and the first event was at Lydden Hill in Kent, and also involved the Three wheeler club. The weather was fairly typically British, and on the way to the circuit while sloshing along gamely at about 70MPH I was suddenly engulfed in the spray of a flock of trikes as they blatted past me! It was then that I realised that these three wheeler pilots were made of sterner stuff. I competed in several events – Silverstone, Ditcham Hillclimb, Lydden Hill, and Wiscombe Park before selling the Mog to finance a trek of some months overland to Australia. We soon moved to Sydney and my personal GPS must have been working well because I found that only a couple of blocks away was a Total Service Station which was surrounded by a mess of Morgans which were pushed out in the weather daily to mature. This was of course, the late Ken Ward’s Boronia Park establishment and one of those Morgans, a 1972 4/4 happened to be for sale! What hope did I have? 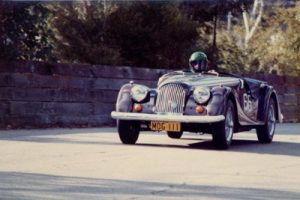 Of course we bought it and immediately entered Silverdale Hillclimb. I used to love that place. The contrast between the the noise and adrenalin of the climb and the serenity of the return road with just the sound of bellbirds was wonderful. Anyway, we soon bought our first house so the Morgan had to go, and was sold to a nice young couple from Baulkham Hills. Mike and Denise Bendeich still have the car and could write many chapters about their experiences, and I hope they do!

But, as any Morganeer knows, once bitten by the Mogbug, life is never again normal. We soon found another stray to take home, this time a yellow 4/4 although after a series of prangs during the next 21 years the car was rebuilt 3 times, was painted brown and then became the “burgundy and brie”. This Mog was campaigned for many years at Silverdale, Amaroo, Catalina, Oran Park etc. and spent quite a bit of time ruining Noel’s back! 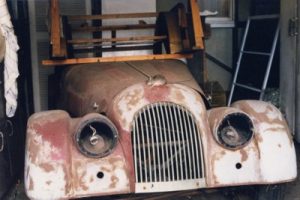 During this time I was aware that the old McKay/Coulston Plus 4 was languishing in a succession of sheds owned by Ken Ward. After many years, diplomatic envoys, endless negotiations and more bottles of red than I can remember, on Good Friday 1998, the derelict old Coulston Plus 4 was loaded onto Noel’s trailer and came home to Epping for a complete rebuild.

There then ensued four years of banging and grinding (in the garage) with much help from our President and others, before we were able to debut the finished result (if any Morgan is really finished) at the Bathurst Morgan Muster in 2001. That trip itself was an adventure- we met some most interesting people at the roadside while doing some “fine tuning”.

The “burgundy and brie” was later sold to Pat Kelly who is presently offering it for sale again. Meanwhile we’re still enjoying the Plus 4 immensely, in the belief that most of the bits that were going to fall off probably have by now, and it’s such a different beast to the genteel little 4/4. After a drive in the Plus 4 you’ve really been to the gym. The steering, brakes, gearbox and clutch have all given you a workout. When David McKay was reunited with the car at Wakefield Park and asked if he’d like a drive, he said, after pushing the brake and clutch pedals, “Ooh, er, not today thanks, John!” 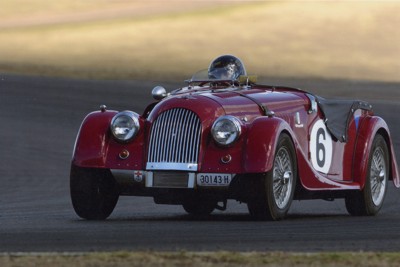 Over the years, many cars have passed through our lives; Alfas, MGs, Lancias, Fiats, Peugeots and even an MV Augusta but the Morgans have always been the focus for the past 35 years or so and it all goes back to that Plus 4 parked in an Adelaide street in the early ’60s. Something that a normal person may find a trifle disturbing is that every successive Morgan I’ve had has been older than the previous one. By the way, does anyone know where I can get hold of an old flat radiator Plus 4?!

Yes that’s me in all the shots except the rat photo! We had to evict the rat when we collected the car!