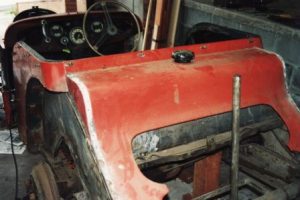 In those days, taking Winstone (our English Setter) for a long walk to Chinamans Beach on Saturday morning was an enjoyable relaxing way to being the weekend. On the way home from their walk on this particular Saturday, 14th May 1994, Graham and Winnie encountered Ron and John Prentice rolling a very tired old vehicle off a trailer and parking it on the roadside outside Ron’s house. A brief bonnet lifting session occurred, just to confirm that the motor was intact – but not in working order. There were gaps in the floor, the upholstery was in extremely poor condition, as was the rest of the car, but it certainly was a Morgan, and it was for sale! 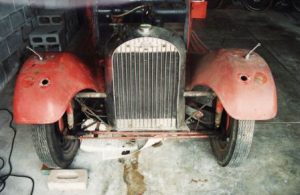 The family was rounded up to go and have a look at the “treasure”. I need a project, Graham said enthusiastically, and I’ve always liked Morgans! No hesitation – buy it! So we did. It was delivered (around the corner) next day, and rolled into our garage, along with a very rusty spare motor, numerous boxes of parts, all in dire need of extensive restoration, including lamps, bundles of wires, and all manner of unrecognizable bits and pieces which we were assured belonged to the car, plus a spare rusty old motor! We all took turns at sitting in the “Morgan”, and although it was in a very sorry state, we thought it was pretty special.
The History:
Our Series 1 was originally registered on 22nd March 1951 and according to Morgan factory records, was delivered to Colmore Depot, Birmingham, as a blue left hand drive model, Engine No. Q296E, Chassis No. 1902. What happened in its life between that date and the next registered ownership (13th August 1969) by Mr B.V.Toms in Kingsbridge, Devon, is unknown to us. What is known is that the blue LHD moggie had morphed into a red RHD Morgan 4/4 2-seater, according to registration records, and bore the British plates LOF 104, which we still have in our possession.

The next owner, Mr D.M. Pyett of Pennycomequick, Plymouth, bought it in July 1975 and later brought the car with him to Sydney. It was not registered here, so we can only assume that it was in need of some serious TLC at that time. In 1988 the car was sold to a MOCA member, Michael Carr, who no doubt had intentions of doing a restoration job on it – as did John Prentice who bought it from Michael a few years later! 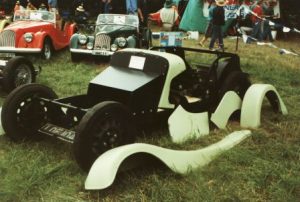 So now we had a project! The intention was to “get stuck in” and do a big restoration job in about 2 years. When Graham announced his plan at his first club meeting, several hardened campaigners subtly suggested that it might take considerably longer than that! However, the deconstruction began with enthusiasm, only to be abruptly interrupted when Graham broke his leg during a skiing accident at Thredbo and was out of action for the next 6 months. Very frustrating!

With the New Year, 1995, came the real beginning of the project. Firstly the garage needed enlarging, so a huge excavation project took place to make room for body panels, chassis, workshop, etc. The removal of all parts was documented and the extremely rotten timber sections used as templates for the new frame which was constructed by Graham and our son Kent, who is a carpenter and loves nothing better than to get the tools out and work on a project.

After all the body panels had been removed, the timber sections were tidied up and used as templates for the new frame. Marine ply was used for the sides of the wheel arches, and for the outer faces of the arches, 6 pieces of 3mm ply were laminated and clamped using the original frame as a template. Australian silver ash was chosen as the timber for the rest of the woodwork. This was bought in large pieces and cut into the required shapes with a band saw. The silver ash proved to be a superb timber to work with because of its very straight grain, and its light weight. After many hours of careful cutting and precision carpentry, a completely new frame was produced. The only piece of original timberwork that was retained was the top of the scuttle below the windscreen, as this was still in good condition.

The beautiful new dashboard was built by Kent using a lovely piece of mahogany, and once again using the original item as a template. All the instruments were later restored, although they were in particularly good condition considering their age and the condition of the rest of the vehicle, and the finished product is an eye-catching feature of the restored Series 1.

During the process of disassembling the car, we confirmed that it had previously been a left hand drive vehicle because on that side of the engine bay the panel adjoining the mudguard had the cut-outs in it to receive the steering column and box. When making the new panels we decided to retain the cut-outs, to maintain the authenticity of the car. 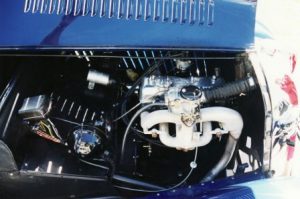 The old chassis had serious rust in it and had been modified with several additional steel pieces, to the point where it would have lost some of its integrity. It was essential to have a new chassis made, so Still-One were employed to produce this from 2.5mm steel, slightly heavier than the original. Once the new chassis was delivered, the next milestone in the project was to progress to “rolling chassis stage” with the new wood frame and rebuilt engine in place.

Graham’s brother, David, took responsibility for the motor and took it to Queensland to have it completely rebuilt and balanced by Morice Engineering in Brisbane. It was an exciting day when, one year later, the finished product was delivered back to us, bedecked in Christmas decorations, ready to be carefully placed into the new chassis. On the restoration Time Line we are now at the end of 1996 – 2 years into the project. By that time the body panels had been fully restored by Still-One, and sat in the garage in a primed state awaiting the time when the bit push to get the project finished began in earnest! Work and other commitments got in the way of progress for about 18 months, but mid-way through 1998 we were ready to get cracking again. 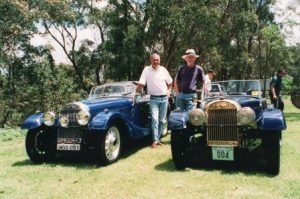 Once again we engaged the services of Still-One to do a professional job to complete the project to the required excellent standard. The radiator was repaired and a new cowl made; the lamps were restored to remove dents and scratches, then all the chromed parts on the car were refinished to bring them back to original condition. Many hours were spent restoring the dozens of small parts that go together to produce one beautiful Morgan! Yes, it was expensive, but it was worth it! The re-chroming list is quite impressive; gearstick, headlight bodies, rims and reflectors, fog light reflector, windscreen frame and posts, centre bonnet mould and fittings, door hinges, ignition switch surround, external and internal door handles, covers and door catch, wiper motor handle, bonnet scrape plates, knobs, spare wheel wing nut, wiper arms, handbrake knob, domed nuts and bolts, etc. Of course, this is on top of the new radiator grille and cowl, and the hub caps. No wonder the car looks so beautiful, with lots of bright shiny bits! 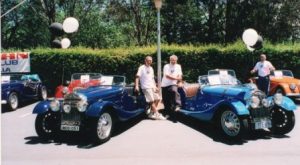 Although most of the old wiring was in the car – in various states of disrepair – it was necessary to purchase and install a completely new wiring loom. This was provided by Vintage Wiring Harness in Bellingen, NSW. The Meadows gearbox seemed to be in reasonable condition, so was not reconditioned at the time of the restoration. However, after a few years and many miles of driving, it has been necessary to have work done on it and recently it was sent to John Needham in Melbourne to make a few adjustments. The brakes also needed “adjusting”. Originally the car would have had mechanical brakes front and rear. However, it now had 9″ brake drums (which confirmed that it was a 1950’s model and not the 1947 model that we thought it was when we purchased the car) and had been modified with hydraulic brakes. Graham decided to keep the originality of the car and put mechanical brakes back on – and fortunately the earlier owner, David Pyett, still had a full set of mechanical brake components for the car in his shed! Don’t throw anything out, eh! Never know when someone might need something useful!!!!

The list of components that had to be either reconditioned or replaced is lengthy – suffice to say we ended up with as close to a new “1951 Morgan 4/4 Series 1” as is possible! An end-date for the project was necessary, so the Terribly British Display in Canberra, October 1998, was chosen for the inaugural run. The upholsterer was given the hurry along; the paintwork was finished; new tyres fitted – registration completed – and we were on our way to Canberra! 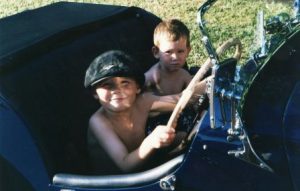 Since this “first” outing, the little blue Series 1 has been all over NSW on Morgan club runs, taken part in the Tattersall’s National tour in Tasmania, been in a container to New Zealand and travelled about 3,000 km over there (Auckland to Dunedin and return) for the Mainland Classic Tour, and enjoyed participating in the Morgan Muster at Bathurst in 2001. It was even given a workout in a Bol D’or event at Wakefield Park and both car and driver performed admirably!
Since the restoration the car has travelled more than 12,000 miles – not too bad for an old girl! We’re looking forward to lining up at the Golden Muster to win another trophy which says “Morgan Muster Display – Best Series 1”.